Directed by Brunei’s first female director, Yasmine: The Final Fist, is ready for its international debut. Canadian indie distributor 108 Media has picked up the worldwide sales rights to Brunei’s first ever box-office movie.

Yasmine, a coming-of-age martial arts film by the Muslim-majority sultanate’s first female director, Siti Kamaluddin, is to have its North American premiere on Friday at the Fantasia International Film Festival in Montreal.
Ahead of that Canadian screening, 108 Media acquired the sales rights to the Liyana Yus-starrer about Yasmine, a young woman who lives alone with her strict father and wants to be a champion at Silat, Brunei’s version of kung fu.

To build a “dream team” for this project, Siti  invited talents from Indonesia, Malaysia and Hong Kong to come to Brunei for 45 days of shooting.

This movie is set to release worldwide — including Brunei, Malaysia and Indonesia— on August.

Brunei Darussalam is one of the smallest countries in the world; while its population is among the richest in the world – thanks to vast oil and gas reserves.  But Brunei’s film industry is yet to be developed and touched. “The last film ever made here was a 1960s how-to guide by the ministry of religious affairs about being a good citizen.” 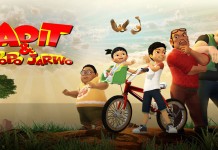